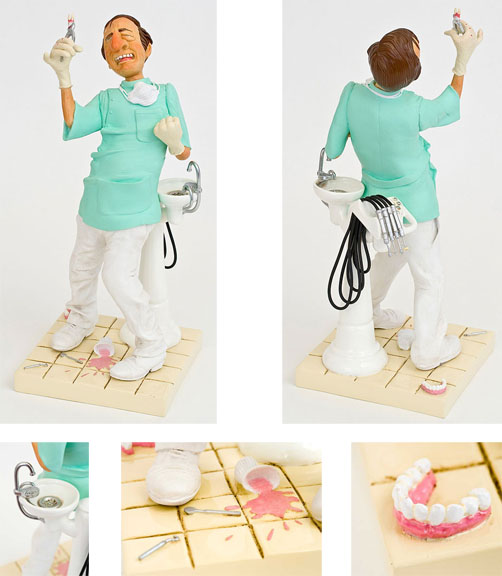 Paquita Gutiťrrez was scared to death of dentists. For the last few days she has been tortured by a tooth. At first, she was hoping that it would simply go away, then she tried all the pain killers in the medicine cabinet. After 3 days, she went to see Carmen, her neighbor who did talking therapy. After 5 days, and not being able to stand it anymore, she made an appointment with the eminent dentist, the doctor Salomon Mimran, whose reputation was the talk of Paris. Paquita, her jaw deformed by an enormous abscess, sat down in the dentistís chair as if it were the electric chair. ďOctor, Ďis it goin to Ďurt?Ē asked Paquita, her words deformed by the inflammation. ďNo madam, you wonít feel a thingĒ, lied the doctor, ďyou are in good hands. Letís see, open up and we will look at this infected molar.Ē ďEhhÖíis alwedy openĒ said Madame Gutiťrrez. At the fourth shot, the anaesthesia began to take effect. She had the impression that her tongue was a piece of rag. She wanted to say something, but only could utter some guttural sounds. The doctor thought that it was going to be easy, but when the second pair of pliers broke in his hands, he began to have his doubts. ďRelax, everything is going fineĒ lied again the doctor as he put his foot on the left shoulder of his patient to gain better leverage. Paquita Gutiťrrez regretted not having made her will. After 40 minutes of struggle, and after a super human effort, the doctor managed to extract the rebel tooth. With pride he studied it attentively and Ö began to feel drops of sweat drip down the back of his neck. ďLetís see, open up ÖĒ said the doctor who shuddered when he saw that the tooth he held in his pliers was a pre-molar in perfect health.